Prehistoric Site in Gogang-dong first became known to the world in the summer of 1995 when the residents of Gogang-dong found semi-lunar shaped knives and stone spears in the mountain behind Janggaet Village (Cheongyongsan Mountain). No one could imagine that such a large-sized settlement site from the Bronze Age could be found in an urbanized city like Bucheon.

Through full-scale excavations that have been held since then, up to 12 rectangular settlement sites (residences) and 6 stone coffin tombs, estimated to be from the Three Kingdoms Period, were also found.

From Prehistoric Site in Gogang-dong, different types of earthenware such as patternless, arc-shaped or bowl-shaped ones, stoneware including polished stone swords, spears and arrowheads, semi-lunar shapedstone knives, drop spindle, adzes and stone grinding pestle, some jade accessories, and earthen fishnet weights were discovered, all of which added up to approximately 110 pieces of historic relics.

Having concluded the 7th excavation investigation in 2015, Prehistoric Site in Gogang-dong now provides important data for research of prehistoric culture and ancient society along the Hangang River and serves a significant role in fulfilling one of the archaeological community’s greatest responsibility, which is the restoration of the life of the Bronze Age. 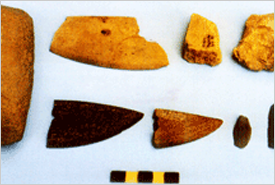 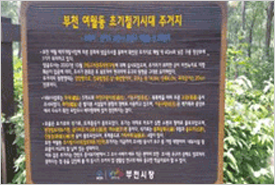 Discovered through a salvage excavation carried out before the Bucheon Yeowol Housing Development Project, this prehistoric dwelling site is located on top of a hill about forty meters above sea level. The excavation and research of the site was conducted by the Korea Institute of Heritage in October 2007 and, finding that there was no damage inflicted upon the topology of the area, the site was refilled after excavation to preserve the original condition.

The excavation revealed that the prehistoric dwelling was on a rectangular layout with its major axis south to north and 14.9 meters in length, the minor axis 6.2 meters in length, and about 25 centimeters in depth. The dwelling contained five hearths, storage pit, postholes and ditch dug along the northern wall. The hearths had no particular artificial facility and the postholes arranged in an irregular manner.